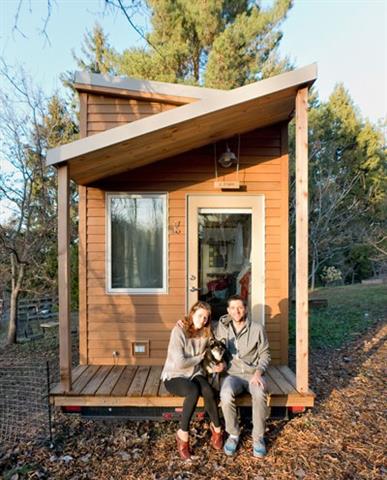 The creation of an elegant tiny home, from scratch
February 2014

Alek Lisefski had a persistent dream; he wanted to build his own house. Though born and raised in Fairfield, Iowa, he had been living for years in ultra-pricey places like Santa Monica and Boulder, and so for a while this dream was more dreamy than pragmatic. Until, that is, he discovered the Tiny House movement.

Today, not much more than a year after he got serious about the idea of a tiny house, Alek and his girlfriend (my daughter Anjali) are living with their dog in Sebastopol, California in a house of his own design which he built in Fairfield almost completely by himself. With its 8x20 footprint, the house definitely qualifies as tiny; it's smaller than the entry hall or the master bath in many a McMansion.

Their dog is not tiny, but moderately sized. The bathroom sink, however, is decidedly tiny: 8 inches front to back and 17 inches wide, but classy and functional. The built-in, pull-out, and tucked away storage is ingeniously-designed and plentiful:; there are closets and shelves and drawers of all kinds. The large sleeping loft has ample headroom and places to store clothing and books. 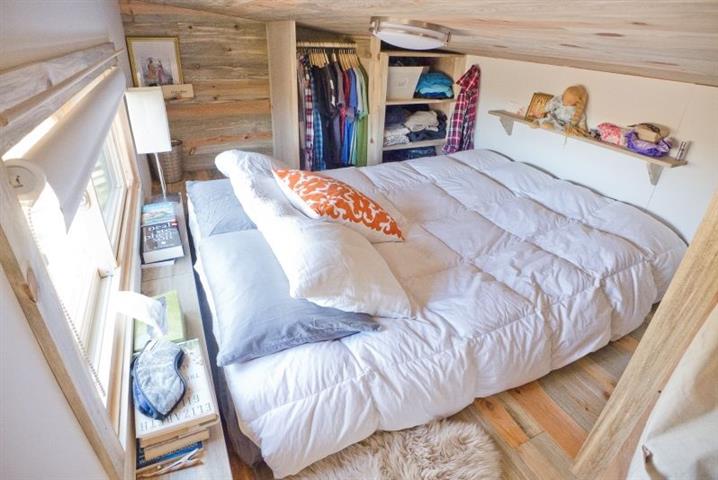 In the kitchen is a stainless-steel stove of the kind you see in sailboats, granite countertops, and a spot for the non-tiny but necessary Vitamix. An all-in-one washer/dryer shares a closet with the half-height water heater. Fold-up and fold-down desks and a collapsible dining table (all made from an old pine table) contribute unexpected space to the high-ceilinged living area — as does the built-in couch that covers a wheel well. 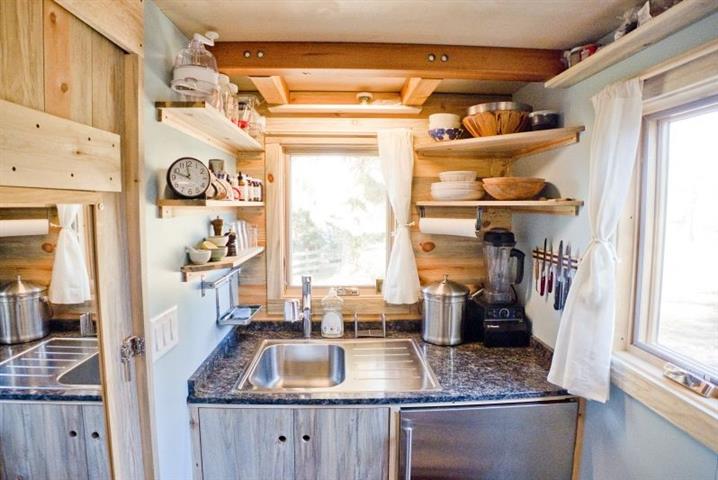 A wheel well? I neglected to mention that this is indeed a house on wheels. Built on a customized 4-wheel trailer bed, the house is totally mobile. The rig fits easily below highway underpasses, and it's narrow enough to require no pilot vehicle or flashing lights as it rolls down the highway.

It rolls slowly, though. Pulling the house with a hefty pickup, Alek averaged 45 mph all the way from Iowa to California, with Anjali following in a car as spotter. The travelers had chosen a southern route to avoid winter weather, but nature had other ideas. A rogue ice storm that hit Oklahoma, Texas, and New Mexico in late November led to some white-knuckled driving, even slower speeds, and a day of unplanned rest as they waited for the weather to clear. At 2300 miles, this may well be the longest distance a tiny house has ever been towed behind a pickup. It came through like a champ, though Alek has no desire to haul it that far again.

Through good fortune and good networking, Alek and Anjali found welcoming hosts in Sebastopol who let them, for a nominal fee, park the house on their acreage, hook up a water line, and draw power from their solar arrays. Their hosts include them in their gatherings almost like family, which has eased any sense of initial isolation from moving to a rural spot in a new part of the country. The tiny house's gray water irrigates the land, and its waterless toilet is serviced by a composting bin constructed of found pallets and cinder blocks. Plenty of windows light the interior and provide solar gain. A small retractable deck will be added in the spring. 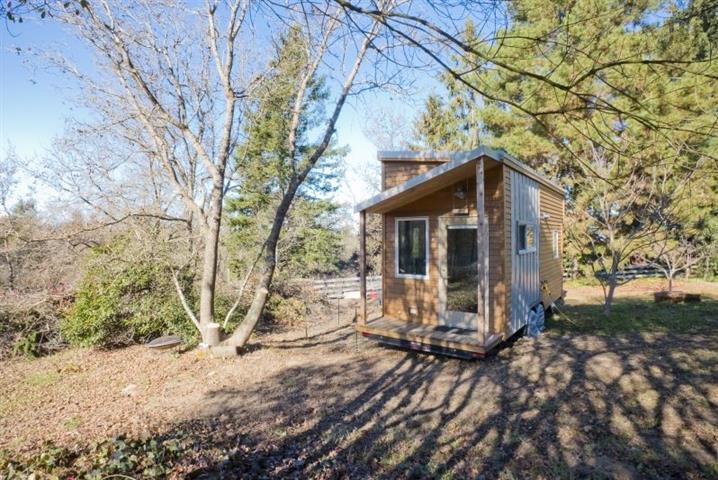 It sounds, no doubt, as though Alek had been an experienced builder. He is that now, of course, but quite remarkably he had no construction experience at all before starting this project. The house is a testament to possibility, an emblem of the potential rewards of self-empowerment and "doing-it-yourself." It was conceived through online research, sustained by a passion for learning, fleshed out by relentless focus and attention to detail, and manifested by a great deal of hard work. A one-day workshop Alek took with Portland Alternative Dwellings provided the final inspiration to launch the project, but most of the learning he had already come to on his own. Satisfied with his careful design, Alek bought some nice Dewalt tools and plunged right in. The actual building took just six months. 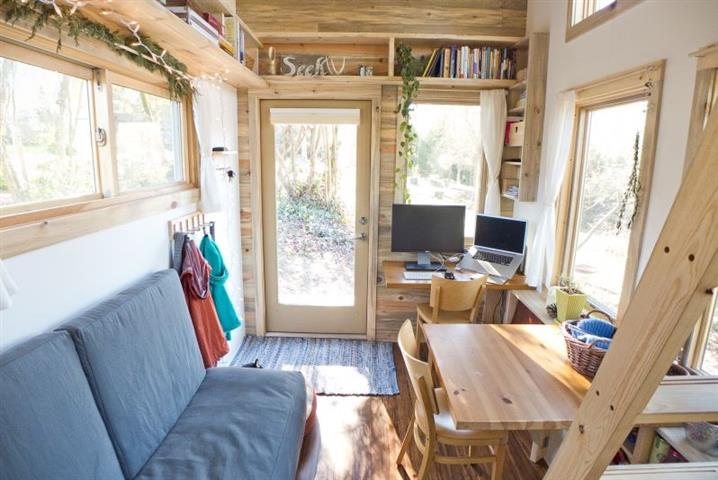 Why such a tiny house? The driving factors were affordability and mobility. The sweat equity Alek poured into the building was enormous, working nights and weekends around his day job as a web designer. There was help from Anjali, from family and friends, and some invaluable mentoring and assistance in the later stages from master craftsman Duncan McMaster. The price tag for materials, however, including the trailer bed and all the upscale touches like bamboo flooring, quality appliances, good windows, cedar beams in the interior and clear cedar siding on the exterior, totaled only about $30,000. The house is mobile without being at all like an RV. It's not meant to be constantly on the move, and it may be a couple of years or more until it moves again. But given that it was not yet time for the couple to put down roots, it was necessary that the house have no roots either, but wheels instead.

Can one really live in a house this small? As of this writing, it is well over a month since Alek and Anjali moved in, and they are adapting well to the condensed simplicity of life in the tiny house. Certain things must be scheduled in advance (a yoga session can only happen when the main work desk and table are not in use), and two cooks in the kitchen require advanced choreography, working best when their dog decides to stay out of the room. By staggering their time away from the house they provide each other some private time. Dinner parties of more than 3 or 4 guests are not very feasible, unless they spill into the outdoors. The options for overnight guests are severely limited. Before the move, a rigorous evaluation of all their stuff was required, to an extent that few of us ever have to face: what did they really need and what was dispensable? SoIt's been a dramatic change from a conventional house, but so far, this simple, pared-down-yet-elegant living suits them well. Anjali was surprised that the "transition to tiny" has been far less challenging than she imagined: "I really do love living here!" As for Alek, he is thrilled to have found "the best and only way to get all that I wanted in one small package."

Check out Alek's blog at tiny-project.com, and the house's Facebook page at facebook.com/TheTinyProject