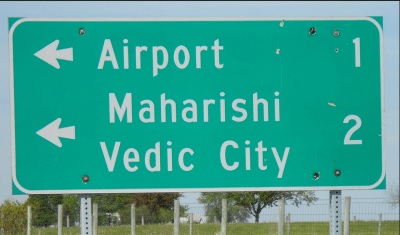 See You In Sat Yuga

Back to the Garden: A project to change the trends of time


No one could say Maharishi's mythic visions were not bold. There is a tradition in India to think in terms of impossibly-long epochs called "yugas," through which the world cycles eternally. Our own age, it will come as no surprise, is the darkest of the lot, known as Kali Yuga. We were not due for a change for some hundreds of thousands of years, according to those who keep and believe in such calendars. But Maharishi had some levers to pull, and as Archimedes once declared, with a suitable lever he could move the world. It was time, he decided, to bring Sat Yuga, a new age of light and truth, far ahead of the ordained cosmic schedules. This was a flourish, perhaps, on the "Age of Enlightenment" which Maharishi declared to have dawned in 1975.
And so, with a couple of days notice, an invitation went out for the faithful to gather in Holland, where Maharishi would be celebrating Guru Purnima, the full moon day in July each year on which he always honored his own teacher and offered his endlesssly ambitious plans for world tranformation. My family decided they would go, while I stayed behind in Fairfield.
Note: "Yogic flying" refers to an advanced practice in the TM programs, which requires the use of thick foam pads to cushion one's "return to earth".
- August 2005

I am not a cosmic party pooper.

I plowed through ridiculous odds, on no notice, to get my wife and daughter to the Guru Purnima celebration in Holland (culminating in a wild U-turn through a red light in Des Moines in the final dash to the passport office before it closed — arriving with 30 seconds to spare). An inordinate degree of luck upheld our flabbergasted but unceasing efforts that whole day. If just one thing had gone wrong during those resplendently frenetic hours, or been delayed by just a few more moments, our plans for Holland would have sunk like a stone. But we made it, and off they went, off to welcome the onset of Sat Yuga at its source.

On Guru Purnima evening, I joined the hundreds who gathered for the outdoor program in an open field west of Vedic City. Images of Woodstock came to mind as we walked the long gravel road toward the site, past a mile of parked cars. Joni Mitchell sang in my memory: We've got to get ourselves back to the Garden. We performed group puja in the middle of the road (probably a first), and then meditators and sidhas were welcomed together, badged or badgeless, on the same field of foam spread out on a mown hayfield (certainly a first), to meditate and do yogic flying in the most delightful, deep anticipation of the rising of the full moon and the better age it was said to herald. Just before we started meditating, my neighbor on the foam held out his hand and whispered, "See you in Sat Yuga."

Now, a few days after Guru Purnima, friends begin to return from Holland, and their tales of the profundity and the unique quality of the gathering there warm my heart.

Sat Yuga — the Golden Age that will shame any age in our history books — has rushed onto the stage. Kali Yuga — the darkest age, the age of all our chaos and suffering — has been cut off, stupendously, after barely getting up a head of steam (a paltry 5000 years into her ordained 432,000-year reign). Bevan Morris declared, as only Bevan can, "this is the greatest moment the world has seen."

I joined in this cosmic party. And yet — I also think about these things. (Ah, you say, that’s your problem. No, I say, it's just my way.)

I marvel at this myth-making. I marvel even more at our readiness to embrace the myth that has been made, as though it were not made right in front of our eyes. We, here and now, as always, are myth-seeking, myth-making animals, so ready to believe what myths we are given.

I marvel at the malleability of our myths, how they are remolded to fit the times. The Age of Enlightenment, which Maharishi declared to have begun in 1975, now thirty years on, lumbering through years of graying expectancy, flowers suddenly, overnight, into something even more brilliant and outrageous. The deadeningly long-lived Yuga into which we were born expires by surprise, blithely overturning millennia of engrained understanding about "how these things work."

I marvel at how easily new myths sweep away their predecessors. The stories that flourished in America and dominated our education — of democracy and individuality, mistrust of monarchs and aristocracies — now fall easily, for true believers, before a new myth, aligned with pomp and privilege, crowns and robes, and that most unlikely, unpalatable of slogans: "damn democracy."

And I marvel at the haziness of the vision at the center of great myths. Who ever really stopped to envision, in detail, what heaven would be like — for eternity, no less (besides the harps, clouds and angels)? Who has fleshed out, for himself, the true texture of Heaven on Earth or Sat Yuga? A blank check lies at the heart of our ultimate mythic rewards.

A myth has a purpose; it exists to do work. A good myth resonates, brings focus, clarity, and inspiration, and aligns people in a particular direction. What Maharishi is doing, and has always done, has, for his true followers, all of these characteristics. Yet his close embrace of science makes for an unusual mix.

Myth and science inhabit different worlds. The questions we ask of scientists — 'What precisely are you predicting? How can I best test it?' — have no place in the realms of myth. There, we ask only: "How does this feel? Is this something I can hold dear?" There, we do not demand, as science must, that specific predictions will come to pass just as they were laid out. In fact, in the realm of myth we make no demands at all, but live in trust, surrender and flow. What will Sat Yuga be like? How quickly will its character become obvious? How will we know it is "really" here? General curiosity is acceptable, but there is no sense, in that realm, pressing these questions very far.

Maharishi likes to yoke together the disparate worlds of science and myth. But his primary use for science is as illustration and analogy, as a tool to decorate the mythic manuscripts that are the pre-established text of his sweeping vision. Science is the handmaiden of this Story; it does not stand on its own.

As for me, I have feet in both worlds. I love what Maharishi has inspired in this world, and I’d love to see a new and better age. My heart quickens at the sight of a rising moon. Yet I also thrill at the power and beauty of the rational mind, and what it reveals about our world when we look very carefully and closely. And so I do not leave the party, yet I continue to look, and to think.