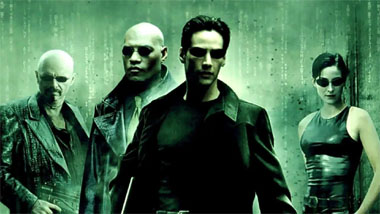 Whose Maya Is This, Anyway?

"I don't like illusions — I can't see them clearly," as the Sick Puppies song goes. Yet our illusions are endlessley fascinating, as are our attempts to try to escape them. The Sanskrit word for illusion is maya, the ultimate illusion, encompassing the entire world. Some reflections on The Matrix, The Truman Show, and Pleasantville.

I know a man who had a religious experience watching The Matrix. It was not the high-caliber special effects that set him off. It was the meaning of the film: the thick power of maya, and the possibility of breaking free.

There is an irresistible link between maya and the movies. Modern sages often base parables on the raw mechanics of film. In a theater, we watch flickering dots of light on a screen — and we laugh, we cry, we wonder, we care. If pictures moving on a flat surface can so easily become flesh, capturing our minds and emotions, it’s no wonder that we’re wholly lost in the rich and seamless illusion that is life itself.

Moviemakers are not the only impresarios of maya. All artists are illusionists, and recognize the kinship between the webs they weave and the greater web from which we do not escape when we put down the book or walk out of the theater. Shakespeare’s Prospero knows that "like the baseless fabric of this vision...we are such stuff as dreams are made on."

Three recent films — The Matrix, The Truman Show, and Pleasantville — take maya as their core subject. The central theme of each is the importance of breaking free from the tyranny of illusion, and each film takes pains to demonstrate how difficult it is to attain this kind of freedom. What strikes me, though, is how much more complicated it is to throw off bondage to maya in our own lives than it is for the characters in these films. The reason, I think, is that the illusion that is rebelled against in all these films is a constructed thing, imposed by an outside agency. There is someone to blame, or at least someone or something to rebel against. We have no such luck.

Whose maya is it, anyway? In The Matrix, a race of advanced machines finds that the best use for us human beings is to breed us and milk us as an energy source. To pacify us in our pods, our minds must be kept "occupied." The most effective illusion, the machines discover, is one that exactly resembles our own world, and they pipe it directly into our brains.

In The Truman Show, a director who aspires to be God, with a cast of thousands and the world’s most intricate set, spins the perpetual illusion that is Truman’s televised life. For the drama to feel real for the rapt worldwide audience, the sponsors and the director know that Truman must stay utterly fooled.

In Pleasantville, we never know just who is scripting this monochrome 50’s utopia, but the citizens have swallowed it whole and now desperately perpetuate its sanitary culture of predictable blandness. The existence of the Don Knotts character implies that someone is behind all this, somehow pulling the strings. But in Pleasantville more so than the other films, the people have become invested in the perpetuation of their own illusion, and have become its timorous defenders.

What does it take to break free? In The Matrix, it takes a way-cool 90’s action figure in black leather, with lots of guts and guns. This is appropriate — and good enough — to fight an external mechanical enemy. But these are blunt and ineffectual instruments for dealing with true maya.

For Truman, the quest for liberation starts with romantic longing, jerks into action when anomalies drop into his path, and succeeds when he decides to risk everything to get out of his impostor world. Truman’s final journey is inspiring; but in the end his escape is a matter of simply walking out on it all. His illusion contains a literal exit door, with hinges and a doorknob; our doors remain metaphorical.

In Pleasantville, two visitors from another world kindle a deep and nearly silenced yearning for authentic emotion among a few good citizens, and the color of their passion spreads among them like laughter. Of all of these awakenings, the one that blesses Pleasantville, with its roots in the heart and an independent way of seeing, speaks most directly to our own condition.

What is the final fruit, though, of all these struggles of liberation? The maya imposed from without is vanquished. But does that not leave that other maya still on the throne of the mind, the maya projected from within, by and onto ourselves?

At the end of his film, when Truman walks through the door at the edge of his world, he walks straight into ours. When Pleasantville blooms with shoots of genuine emotion, it takes on the colors of our own cities and towns. And when Neo risks everything to fight the Matrix, what he fights to restore — paradoxically — is "real" life as we already know it.

As a child, my most potent nightmare was the one from which I could not wake up. Pursued by monsters, I was at first thrilled to discover that I could awaken myself, by mere intention, in the nick of time. Like a precocious hero, I was victorious over evil and freed from illusion. But moments later came the spine-chilling realization that while I was apparently awake in the safety of my own bed, the monsters, impossibly, were back — and what had seemed like awakening was only my rising to another level of dream within my dream.

What a movie it could have been if, after smashing the Matrix, our hero discovered that his real challenge had just begun — that the Matrix had been a cheap trick, batteries included, compared to the subtle and self-imposed matrix of illusion that we ourselves project as reality. Or if Truman had walked through that door and into the full-bore realization that leaving Seahaven had been merely an initiate’s warm-up exercise compared to the challenge of freedom that he now faced.

True maya is made not by machines, by a conspiracy of power, or even by the gods; my maya is made by me. That’s a much harder movie to make. That’s a harder maya to break.