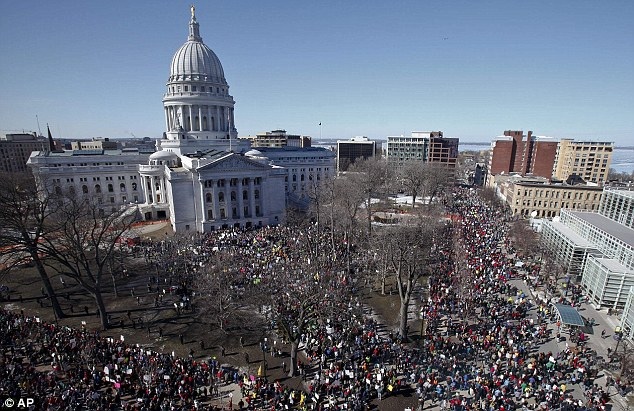 Madison, Wisconsin in 2011 - a call to action in support of democracy and a just society

Disclosure: My wife and I were raised in Wisconsin, we are bursting with pride about her Progressive history, and we joined the recent protests at the state capitol in Madison.

Police estimate that, twice in the last weeks, the protestors in Capitol Square in Madison numbered as many as 100,000, more than at the height of the Vietnam War. Republicans frame their recent legislative actions to eliminate collective bargaining as "budget balancing". But the majority of citizens sees through that spin and recognizes a dangerous assault against working people in general and an attack on hard-won social gains. Boldly in evidence at the protests have been uniformed firefighters, farmers, students, teachers, the retired, professionals, and both union and non-union workers. In other words, the people of Wisconsin. The police who kept order in the Capitol smiled, shook protestors' hands, and said "thank you" as the throngs moved in. We saw at least one tear in a policeman's eye.

One of the favorite chants in Madison these days is: "this is what democracy looks like!"

Whatever you think of the messy imperfections of the democratic process, Gov. Scott Walker is not a worthy alternative. With billionaire corporate backers, he and other Republican governors are capitalizing on the economic crisis to create structures even more favorable to the wealthy elite. Today, the richest 1% in the world own more than 40% of all global assets, and that power grab is accelerating. The burgeoning power of corporations, and the assertion of their "rights" over the cherished rights of individuals, is one of the most alarming trends in today's world. And now, with the ability of corporations to make unlimited campaign contributions, the dangers have never been greater.

In this context, the mass protests in Wisconsin are an inspiration, proof that the people still do have power. Walker and his people hope that the protestors will tire out and fall back. That is what we cannot let happen. For us in Fairfield, Madison is less than 5 hours away by car, through the lovely hills of southwestern Wisconsin. Get a carpool together, take that trip, and let your voice be heard. Beyond that, Wisconsin law allows the recall of representatives, and a push has begun to recall those behind the recent legislation. This is one way to quickly reverse the trends. Contributions to the recall campaign can be made at http://tinyurl.com/4r2pwsm (every dollar will help). Meanwhile, follow the action on alternative news outlets like Amy Goodman's democracynow.org or on-the-ground video from livestream.com/theuptake.

Wisconsin is the most visible locus of the current struggle, but challenges are breaking out in Michigan, Ohio, Idaho, Indiana, and elsewhere. In Iowa, Governor Branstad is leading a charge to remove safeguards against the excesses of factory farms. It is up to the people to take a stand, and the people = us. On the ceiling of the chamber where Walker signed his infamous bill are these words written in gold: "The will of the people is the law of the land."

For those who want to put a stake in the ground against the onslaught of the corporate juggernaut, or to raise their voice for the people, this is the time. This is democracy, now.