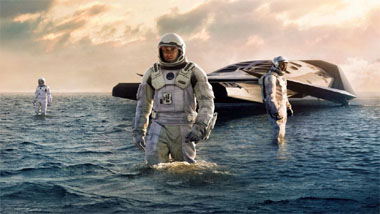 Interstellar is one of those rare films that is driven by love but contains neither sex nor romance. It draws its passion from a different vein. The love is abstract — a love for humanity, for the people of earth and their future — but it is also specifically embodied in an achingly close relationship between a man and his young daughter. Cooper, the story's hero (Matthew McConaughey), takes on a spectacularly dangerous mission to the stars as the only way to save his dying world, but also very specifically as the only way to save his family and the young daughter he so dearly loves.

This is not a story, however, in which "love is all you need." The quest for salvation portrayed in this film can only be achieved through technology. In this sense the film matches the plight of our own world, as we look to emerging technologies to provide tools that will enable us to claw back from the perils our past excesses have delivered into our ailing atmosphere, our oceans, and our climate.

Along with love, what burns through Interstellar is bravery, and the readiness to push through to every raw edge and beyond. But this is not the kind of passion for discovery or adventure that is on display in 2001 or Contact or Star Trek, or for that matter in the atories about Magellan or Columbus; it is instead the passion to do what absolutely needs to be done, no matter what, to preserve the future.

I love this film, the story it tells, and its visual and musical feast. But it also makes me, as a political animal, reflect on the challenges we face, and on what must be done no matter what, here and now in this actual damaged world of ours. In Interstellar, a small band of heroes save the day; they do it all. Where in their world are the voice and spirit of the people, or any visible leadership by government (the only agency large enough to address a crisis of this scope)? The world has capitulated, and lives out its days in resignation or denial, and government has faded into irrelevance. Only a secret remnant of NASA remains, somehow with sufficient resources to propel our heroes into the future.

We, too, need wellsprings of bravery, but not just to motivate a band of heroes. We need bravery and commitment that can lead, organize, educate and inspire us all – and demand from all players, at every level, the hard changes that become increasingly inescapable.

And we, too, will do it all for love.