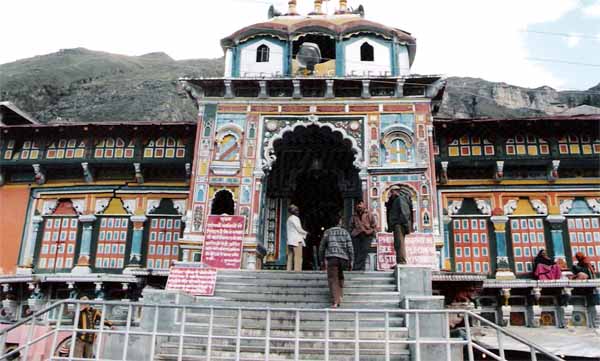 A Stay in India (3): Darkly Potent Temples in Varanasi and Badrinath

"The hushed silence which, in other traditions, may be associated with the sanctuary is not at all a Hindu mode of reverence. To the Hindu who has come here for darshana, the sights and sounds and smells of the temple, the shouting and chanting and clanging of bells, even the jostling of the crowds, all contribute to the aura of sanctity."
Diana Eck, Banaras, City of Light

Plunging deep into Varanasi’s temple district, winding through narrow market alleys, we watch a bull saunter down a lane and up the steps into a temple. A few moments later he emerges, his temple business finished, and makes his way back down the lane.

My American friends and I have a harder time than the bull did gaining entry to Vishvanath, the greatest of Varanasi’s pilgrimage sites, strictly reserved for Hindus only. Improbably, after lengthy appeals to the director, he suddenly agrees to admit us. We buy elaborate baskets of offerings and begin the journey into the great maze of the temple. The next half-hour merges into a loud buzzing blur of jostling movement down labyrinthine stone corridors, brief anointings in inner sanctums amidst clanging bells, rushed encounters with sacred lingas fairly buried beneath flowers, garlands, and rupee notes, demands for baksheesh from priests selling blessings at every turn, and rebukes for our insufficient generosity. The heat and humidity inside the temple are tremendous, the crowds press on mercilessly, and everything dissolves into a melted sensory overload, suffused by a droning undertone of mass devotion. There is no time, no silence, and no refuge to assimilate or savor what is being experienced.

We emerge from Vishvanath blasted as by lightning, dripping with sweat, foreheads smeared with sandalpaste and anointed with multiple red and white tilaks. We walk through the market alleys, silent, dazed.

Badrinath is a great temple to Narayana or Vishnu, high in the Himalayas twenty miles from Tibet. The great seer Shankara taught here, and nearby is the waterfall where Yuddhistira and his dog entered heaven at the culmination of the Mahabharata.

The doors to the Badrinath temple are festooned with pointed brass shields, symbolic of the need, in older days, to prevent their being butted down by attacking elephants. Inside, the temple is supported by black marble pillars, finely carved with images of Vishnu. The stone ceiling and walls are blackened by centuries of smoke — as is the inevitable anomaly, a huge crystal chandelier in the center of the space, probably never illuminated, and as black now as the marble pillars. Tall doors of high-relief carvings in silver flank the inner sanctum, where stands the high priest of Badrinath, the Rawal.

Tall, rather young, close shaven but with the shadow of a heavy beard, the Rawal wears a flat black felt hat like a skullcap with no brim, reaching down behind his ears, and a long, dark coat with a vibrant orange sash. Ordinarily reserved, when the great puja begins the Rawal becomes a master of dramatic gesture.

This pre-dawn ceremony is called Mahabishek — the waking, bathing, and dressing of the deity. The god is revealed, completely bare, the chest and arms of the seated figure clearly visible. There is an elegance and power in this stone image, like an unfinished Michelangelo sculpture — a dark gray rock bespeaking the potentiality of a god. The statue is said to have been self-manifested, not carved. At the time of the Buddhist upsurge, it was tossed deep into a hole in the river, where it lay for centuries. It is said that Shankara divined its location, recovered it and reestablished the Badrinath temple, but the statue had been worn smooth by its years in the rushing water.

The Rawal is in great form, making complex cat’s cradles as he prepares sacred threads to be strung behind the statue, casting long, knowing glances over his shoulder at the people. He wets huge garlands, and without warning swings them forward, electrifying us with the sudden spray. He pours great pitchers of water, milk, curds, ghee and rosewater over the god’s body until it shines in the candlelight. Placing his hand on the deity’s forehead, he pauses in intimate communion. Drying the statue, he packs it with thick sandal paste, forming the flesh of its body with the flourishes of a sculptor. He adds a crown, garlands, drapery, jewels — with precise positioning and care, stepping back like a master designer, firmly nudging each element this way or that until this earthly representation perfectly reflects its divine progenitor.

The pujaris, the officiating priests, move among the worshippers with tall fires of ghee and of camphor — and I pass my hands through the flames and over my head and face as a blessing. An old sack-cloth sadhu strikes the main bell at the back of the hall, and the ceremony is suddenly over.

In the sheer material profusion of this display, in its focus on this embodied deity and the extravagant objects of his adornment, it has been too easy to lose touch with the fact that all of this, in the end, is about honoring the Self. The devotions have been rich, thrilling, captivating. Yet the path seems circuitous.