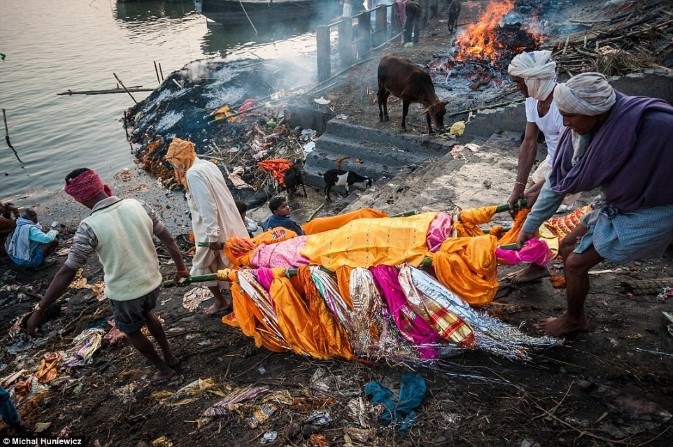 A Stay in India (2): The Otherworld of Varanasi's Cremation Sites

Devout Hindus come to Varanasi to die, becoming jivan muktas, 'liberated while yet alive.' The Mahabharata promises, "If only one bone of a person should touch the water of the Ganges, that person shall dwell, honored, in heaven."

Our first morning in Varanasi, we rise while it is still dark so that we may hire a boat on the Ganges before daybreak. As the sun rises over the jungle of the far bank, the river changes colors and textures, reflecting the clouds of the dawn in its gently roiling surface. With morning come the ritual bathers and devotees at each of the ghats, their robes and saris aglow in the early rays of the sun. In this frenetic city, now is the blessed and quiet time, wonderful to be on the river.

Our boatman pulls up near a cremation site, where two pyres burn and a custodian pokes at the coals. A house sits immediately next to this burning ghat, directly on the water at its current flood stage, and the family comes out to use the river to wash, brush their teeth, and clean some utensils. A young girl bathes her pet bird, first pouring water onto the creature in its cage, then ceremoniously dunking the entire cage, bird and all, under water three times.

A ghat official (part of the clan of untouchables that has managed cremations here for centuries), dressed in a short dhoti and sandals, with brown leathery skin, jumps uninvited into our boat. "Burning is learning," he intones. "Cremation is education."

By now we are fairly inured to men popping up out of nowhere and offering their services, but his opening is a good one, so we share a smile and take him on: "Yes, tell us."

Did we know that not everyone may be cremated? Certain people are never burned, but are weighted down and buried in the waters of Ganga: young children, sadhus and saints, pregnant women, lepers and smallpox victims, and those who died of a cobra bite (since the cobra is sacred to Shiva, its bite provides sufficient purification). In 1978, during the record flood, the burning ghats were submerged and no cremations could occur. But the steady tide of the dead arriving in Varanasi — thousands each week — never stopped. For days it was necessary to perform water burial for everyone, for there was nowhere to store so many bodies.

The government, he tells us, encourages the use of the new electric facility — whose smokestacks rise incongruously over the river on our left. But the people still prefer the old ways. The rich use sandalwood for their pyres, though the masses can afford only common woods. The body is wrapped in silk, bathed in the river, doused with ghee. The family attends, but witnesses the events impassively, for outward grieving is held to be inauspicious.

But our man has work to do, and he leaves us to complete our education first hand. We find our way to Manikarnika, the main burning ghat, where mountains of firewood have been collected near the riverbank, stacked impossibly high. A huge iron balance scale, like an implement of the last judgment, stands by to weigh out wood for the cremations. (Later we would see bicycle carts heaped with firewood heading for the river, their drivers laboring under the mortal loads, rolling through the streets of the old city.) Below the towering woodpiles, two bodies wrapped like bright mummies in fine cloth lie at the edge of the river, which laps at their feet. A few yards into the river, a herd of water buffalo swims together, cooling off in the dank heat of the day. From the balcony of an overhanging building, young boys dive into the river, barely missing the buffalo, splashing and shouting in this brown fecundity. On a rise above all this, half a dozen pyres burn, and a body is placed on a new woodpile and covered with a final layer of branches before being set afire. We climb to the roof of a ghat building, where sadhus and old women sit, waiting for their time to die, gazing out over the burning ground. The gray smoke curls in our direction, mildly acrid in our nostrils, and we climb down to leave this unworldly place of finality and liberation.