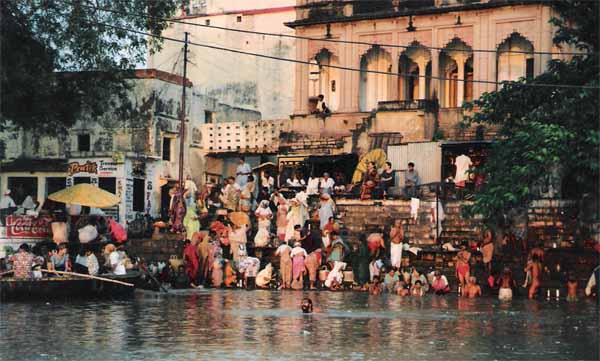 A Stay in India (1): A First, Rich Encounter with the River Ganges

Bring your Western mind to Varanasi, and it will be changed. One of the oldest cities in the world, said to be the permanent abode of Lord Shiva, Varanasi is among the holiest places in India — intense, rich, transforming.

The Ganges, as we approach it tonight for the first time in our lives, with the full moon rising over its broad expanse, is cresting after monsoon at a depth of 200 feet. The steps of the river ghats are almost completely under water. We hire a boat to take us up to Kedar Ghat, the place from which, some 50 years ago, a party of saints set out for the water burial of Brahmananda Saraswati, Maharishi’s Guru Dev. Little girls sell baskets made from large folded leaves, each with a candle set in a bed of flower petals, to be used as prayer boats. As we walk up the steps from the water toward the Kedara temple a sadhu stops us with an urgent reminder to remove our sandals.

Barefoot, we plunge into the temple, namesake of the famous shrine to Shiva at Kedarnath high in the Himalayas. Kedara is a living temple, used by local people more than by the throngs of pilgrims who flock to Varanasi’s more famous and hectic sites. As I cross the stones of the threshold, I am struck at once by the primal power, collectedness, and resonance of this place. Devotional energies pulse through the large enclosing chambers, as bells clang in the shadows, smoke swirls from incense and ghee lamps, sadhus drone their holy chants, and men and women lose themselves in sacred rituals. Ducking low through an arched doorway, we come into the small chamber of the inner sanctum, which holds the primary linga — a rough cropping of rock with a white stripe run through it, guarded by a kneeling stone image of Nandi, Shiva’s bull. Here the devotions culminate, captured by the dark magnetic potency of this ancient rock. The moment passes into a blur, as we are swept out by the steady flow of worshippers seeking their own chance with the god. Surrounding the sanctum, in small chambers off the wide corridors, are a dozen or more minor shrines, housing lingas or primitive hewn images, some splashed wildly with orange paint, adorned with flowers, incense, sputtering lamps.

We sit in silence for a time, and just as we make ready to leave, a new wave of chanting, deep and loud, suddenly arises, echoing through the hallways. A priest and his party carry flames of camphor and Shiva’s drum, two sided, mounted on a pole, with stones on ropes that strike the drum as the pole is twirled. The beat is strong, insistent, and, leaving the others, I am drawn back into the corridors of stone to follow this procession from shrine to shrine, flowing with these devotions, witnessing silently, in awe — having stumbled onto a vital ritual of a religion whose power I recognize but to which I do not belong. A dark, transcendent energy pulls me toward this primordial devotion, and my experience, for these few moments, falls deep below the level of words or of thought. Kedara has become one of my favorite places in the world.

When we emerge, sadhus are bathing at the foot of the steps, and we strip to shorts and dip below the surface of the water three times, the traditional pattern for a ceremonial bath in the Ganges. I know that the river, so many hundred miles from the mountains, is brown and turbid, but in the darkness it feels fresh, and we emerge more awake and alive. I buy a prayer boat and set it on the river, the candle’s reflection dancing on the waters.

Our boatman is long gone now, so we leave Kedara through the winding lanes of the ancient city. Old men sleep on the stone of the alleyways, curled up next to stray dogs, as cows wander through lanes hardly wide enough for two to pass. Lamps glow in living rooms that open immediately onto the dark alleys, as we move silently here amidst the intimate life of the people, close, still, to the holy river. A few tiny shops are open even in these small stone lanes, with food cooking on gas burners, sweets, and household items for sale. In these alleys comes our first encounter with what was to become the dominant smell of India – a mixture of cooking spices, cow dung, incense and urine, a foreign smell, yet sweeter and lighter than I would have expected, almost too organic, exotic yet familiar.