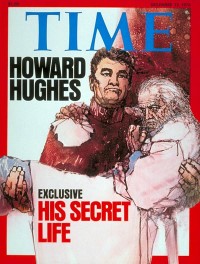 I Can Explain All That...

"The mistake of the intellect" — or "pragyaparad" in Sanskrit — is a label for the intellect's endemic inability to recognize reality in its fullness. Sometimes a simplification is more satisfying than no explanation at all.

I finally saw Martin Scorsese’s much-Oscared film, The Aviator, just a year or two late. For those of us who lived through the latter part of Howard Hughes’ life, our most vivid memory of this great man is probably how shudderingly weird he became — holed up in his penthouse cloisters, windows blacked out, fingernails grown so long they curled, a victim of paranoia and compulsive disorders run wild.

Scorsese chooses to put the painful strangeness of Howard Hughes front and center, along with his brilliance. But he also chooses to "explain" the strangeness. Lest we miss his point, he both begins and ends the movie with the same scene: Hughes’ mother, when he was a young boy, drilling into him, with sweet but eerie words, the seeds of his future obsessions.

The message? Hughes’ mother stamped him irrevocably with his weakness and his fate. As a plot device this is perfectly clear, but I found it completely unsatisfactory, tacked on like a preface and a postscript, a pat explanation that reduces the deep conundrum of this creative and flawed man to a flat chain of cause and effect. "Yes, it’s horrible," we are meant to conclude, "his mother ruined him." We are left with a nice tight theory in place of the complex, rightfully unsettling mystery of a remarkable individual life.

When something goes terribly wrong, we want to know why. Scorsese, in this film, presents a psychological explanation. Here in Fairfield, our preferred explanations tend to be not so much psychological, but rather astrological, karmic, or even — these days — architectural. Explanations come in all stripes.

In the quantum-mechanical community of Fairfield, Iowa, we’ve often heard the phrase "collapse of the wave function." This is a way of describing how the infinite possibilities present in every spec of space-time can resolve into one particular manifest event. Without it, there would be no relative life. We’ve also often heard the phrase "mistake of the intellect," which is another way of explaining how we experience apparent separateness in what is essentially an unlimited and unified whole.

I would propose a new phrase, a combination of these two — "the collapse of the intellect" — to describe our Scorsese-like obsession with meaning. From the buzz and whirl of events too unpredictable and complex to fathom — that is, from the raw mystery of our existence — the intellect gives up, snatches at explanations, and thereby collapses to a point. We retain our dignity, having discovered the 'true' reason for something that happened. We walk away, more secure somehow, with a story that makes it all make sense.

How many times have we seen, on TV or at the movies, a brilliant lawyer making closing remarks to a jury in some contentious and complicated trial? The job of the lawyer — like the job of our collapsing intellect — is to construct a story that compels belief. The lawyer’s job is not to discover the truth; his job is to win the day. In every interesting trial, there are two well constructed and opposite stories, but only one can prevail. It goes without saying that it is not always the "true" story that wins. It is the story that manages to convince. The winning lawyer need not even believe his story himself. His job is to present something that works as an explanation.

So too with our collapsing intellect. Truth is often not really our goal, any more than it is for the trial lawyer. The job is to collapse the contentious and unsettling richness of life — the irreducible particulars of our own experience — to explanations that make sense and eliminate the troublesome unknowns. Rarely do we allow ourselves to look directly at something truly disturbing and admit, "I don't know why."

The meaning we seek in our lives, like the meaning Scorsese tried to add on to his film, comes when we find our place in a story that works for us. We seek the comforting sense, if not of fairness, then at least of cause and effect. "Why did this happen?" you ask. "I can explain it," comes the confident answer. Yet, knowing the intellect’s bag of tricks, there is ample room to wonder. Does the explanation do justice to the unfathomable richness of experience that tempted the intellect into collapse?