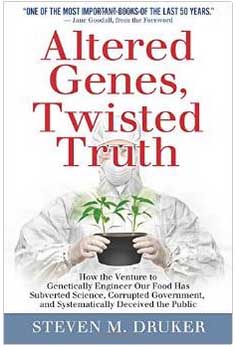 A book by Stephen Drucker, which I reviewed in The Iowa Source, April 2015

Steven Druker's new book is shattering. What it shatters is our complacency and our sense of safety — about genetic engineering specifically, but also about the wisdom of relying passively on the public pronouncements of experts to tell us what is true.

Though it shatters, this book also inspires. What is inspiring is Druker himself, presenting with clarity and intensity the meticulously-argued results of his decade-long quest to get to the bottom of the controversy about genetic engineering (GE). Evincing his legal training and his education as a philosopher, Druker is relentlessly incisive. He will not be bamboozled, he will not allow glossing over, he will not be intimidated by experts or authority — whether in the form of the FDA, august scientific organizations, or acclaimed individual scientists — if they have not fairly addressed the evidence and the complexities of the matter at hand.

Altered Genes,Twisted Truth (published in March, 2015) garnered impressive advance praise. The esteemed primatologist Jane Goodall wrote the book's foreword and called it "one of the most important books of the last 50 years." She went on to say, "Steven Druker is a hero. He deserves at least a Nobel Prize."

Whether one agrees with the enormity of that assessment or not will depend on what one ends up thinking about the case Druker builds. What cannot be denied, however, is that this book is a tour de force. It should be required reading for anyone grappling with the challenges posed by GE, and anyone interested in the general battle for reliable knowledge in the face of distortions, minimizations, and obfuscations by scientists, government, corporations, and the media. Ideally, that should include all of us.

Druker, a Fairfield-based public interest attorney, led a lawsuit against the FDA which forced the disclosure of documentation proving that FDA scientists sounded a strong alarm early on about GE's dangers. The FDA chose to ignore this alarm (illegally so, as Druker argues), which opened the floodgates to GE. He has since uncovered a larger pattern of misrepresentations, cover-ups, deceptions and what he boldly calls fraud, which has resulted in a stream of public assurances about the safety of GE that he finds to be utterly indefensible. These assurances have been made not just by the industry that has a financial stake in the matter, but by prominent scientific bodies, governmental agencies and commissions, individual researchers, and the media.

Druker insists that safety is the last thing we will find in the products of genetic engineering. He explains the misunderstood concept of "risk." Risk is determined by multiplying two factors: the likelihood that harms could result, and the severity of the potential harms. GE, he makes clear, could result in harms of almost unimaginable scope and severity. The process involves manipulation of the most complex systems in the universe — the coded, self-interacting, massively parallel information systems that lie at the heart of living things. Scientists are far from being able to predict or control all the consequences of the genetic changes they make. (The details he reveals about the technicalities of GE, and the lack of precision it entails, are particularly eye-opening.) Even if there were only a small chance that extreme harms would actually result from GE (and there is little reason to be sure that this chance is small), the enormity of the potential harms establishes a very substantial risk. This is especially true given that no suitably-designed and comprehensive safety-testing has ever been applied to a GE product.

How bad could the harms of GE be? Druker does not indulge in scare tactics, and he could never be accused of making "hysterical anti-science rants" (to quote the kind of dismissive smear GE advocates like to use). In a passage that illustrates the book's impressive balance, after quoting geneticist David Suzuki and soil biologist Elaine Ingham about a true doomsday scenario that could be triggered by GE, he spends the next paragraphs giving due weight to those scientists who disagree that this scenario is at all likely. But though always balanced, he follows the evidence where it leads. Drawing on the expertise of leading micro-biologists and geneticists (his research has been vetted by strong scientists every step of the way), Druker relentlessly builds the case that we have solid reasons to be deeply concerned.

Druker does not focus on the easy targets, corporate giants like Monsanto who are driven to profit from GE without due regard for consequences. Instead, he places responsibility on the scientific establishment and the FDA, who had the ability to sound the proper alarms at an early enough stage to have discouraged these corporations from making their huge investments in GE in the first place, and who could bring it to a halt even now.

One of the hardest challenges we all face — one of our most daunting responsibilities — is to determine what is true in the face of contradictory expert testimony. There are, unfortunately, no scientific bodies that we can always rely on as a guide. The American Association for the Advancement of Science, for example, issued a statement declaring that "the scientific evidence is clear" that human-caused climate change is real and is a serious threat. But the AAAS also issued a statement, extremely similar in language, declaring that "the science is quite clear" that genetically engineered foods are safe. On what basis can we, as laypeople, choose to accept one of these statements — coming from a body that should have access to far more evidence than we do — and reject the other? How can we know whom to trust, that is, and when to trust them?

Druker does us a hard but valuable service, by showing us that things are not as simple as they seem, that there is work to be done that we cannot responsibly escape. We must weigh the evidence properly, dig deeply into the facts, and illuminate glossed-over complexities; there is no other way.

There may not always be a Steven Druker around when we really need one. But we are lucky that we do have one now, and he deserves acclaim for showing us what the process of individual responsibility looks like in the face of a juggernaut of orchestrated opinion.

For all those interested in the details of the GE controversy, or the challenges involved in discerning the truth in any crucial scientific controversy, this is the book you have been waiting for.