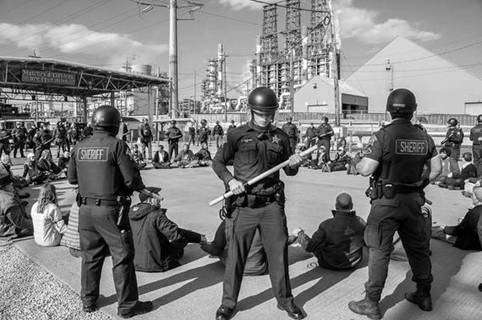 The police were in force at the scene of our action

Why We Were Arrested

On May 15, we were arrested, along with 38 others, in a climate change protest at the BP oil refinery in Whiting, Indiana.

We were responding to the near-unanimous assessment of climate scientists worldwide that 1) climate change is real; 2) it is extremely dangerous; 3) human use of fossil fuels is the primary driver; and 4) we must act decisively now to avert its most severe impacts.

Nearly 1000 people marched, young and old, united in their commitment to break free from fossil fuels. Law enforcement blocked off streets to traffic for 3 miles and kept a low profile as we passed. It wasn’t until we approached the refinery’s main entrance that police in riot gear established a formidable presence./span>

Those who had volunteered to be arrested moved to the front of the march, entered BP property, and sat down peacefully. We were then surrounded by police, taken into custody, handcuffed, and transported to the East Chicago Jail. After 3 hours in holding cells, we were charged with criminal trespass, released on our own recognizance, and ordered to appear in court in June.

Why were we willing to face arrest? We believe that climate change is the greatest threat to life on our planet in all of human history. 2015 was the hottest year on record, and 2016 is on pace to be even hotter. We asked ourselves "What more can we do?" and decided that it is up to ordinary people like us to take a stand and demand change.

Non-violent civil disobedience has been a successful strategy in most of the social movements in American history. The time has come to apply it to climate change. As activist Tim DeChristopher puts it, civil disobedience is a way to make our actions match the seriousness of the crisis we are facing.

Risking arrest is not for everyone, of course, but everyone can do something. Learn more. Speak out. Take a stand. Write and call our legislators. Be strong and bold. Time and again, history has shown that when people come together they can overcome seemingly insurmountable forces. As we chanted on the march: "A people united can never be defeated."

We're often asked, "Did the march have the desired effect?" Yes, it did. The desired effect is a shift in consciousness, a rousing of the spirit, a refusal to accept the future that looms over us, an acceptance of personal responsibility, and bringing others into the conversation. Commitments grow one person at a time; there is no other way to effect social change.