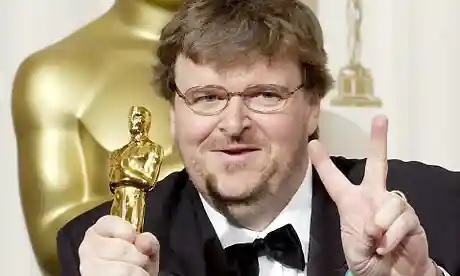 All's Fahrenheit in Love and War

Some disclosures: I think Fahrenheit 9/11 is a must-see film. And I think George Bush is a must-lose presidential candidate.

I would be overjoyed if every voting-age person in America saw Michael Moore’s film — and even more so if most of them ended up voting against Bush.

But Fahrenheit 9/11 not only cheered me, it saddened me. I am disappointed by the quality of our political discourse, including what Moore has now dished up. I left the theatre with a forked reaction — simultaneously cheering the message and regretting how this powerful storyteller chose to deliver it.

This is the first blockbuster film aimed squarely at a presidential election, and it's sure to be the first of many. We are already drowning in eddies of partisan spin from talk radio and Fox news and so many skewed sources, and now Moore has added film to that mighty flood. Granted, he is on the "right side", and has undeniable dramatic and comedic flair, but Moore did not much raise the bar for intelligent political discourse; he jumped into this unfortunate fray and mixed it up at the going level. Should I cut him some slack because I am in general agreement with much of his politics? I don't think so, much as I am tempted to do so.

More than one "P" word comes to mind regarding Fahrenheit 9/11 — it is not just partisan, not just a polemic, it is propaganda. (We grew up equating propaganda with an evil invented by Communists, but it is simply a word for doing what it takes to convince people of your views, by a controlled selection and presentation of the "facts".) Moore aggressively selects and presents, glues his facts together with speculation, extrapolation, and assertions, and plays our emotions like a master. The subtlety of this film’s moral universe would be better represented if it had been shot in high-contrast black and white. I cringe at the word "documentary’ being used to describe this film; that term still connotes an attempt at objective truth.

Moore raises excellent questions, and he throws open the heavy curtains of deception around the Bush administration. But he rushes in too quickly with summary judgments, and the whole thing is shot through with innuendo.

Would the effect have been as great, would as many people have been moved, if Moore had used more responsible and balanced techniques? Almost certainly not. And sadly, as long as that is true, broadcasters and politicians and filmmakers will be tempted to keep turning up the heat, even when it means dimming down the light. When we count our success only by the number of people moved, only by the power of the persuasion, we lose something terribly vital along the way.

I find this hard to say in this case, yet I believe it: The end does not justify the means, even when the end is as important as the defeat of George Bush.

In the end, deeply forked as I am, I am glad that Fahrenheit 9/11 was made. I will smile, however ruefully, if Moore gets a second Oscar. I simply wish he could find more honest and honorable ways to tell his stories. The good guys should be honorable not only in their goals but also in their methods. I have written Moore to tell him as much, and I urge you to do the same with your own reactions, whatever they may be. He needs to hear from us directly: mike@michaelmoore.com.

If you have not yet seen the film — go now, see what the fuss is about, find out what the electorate has been given to digest, join in the debate, and decide for yourself. To the extent that he spurs us to take on that personal responsibility, Moore has done us a great service indeed.